The Mystery of the Peatmore Press Amazon Paperback Novels – Update

It is interesting to report that the staggering listing of $615.72 on amazon.com and the outrageous listing of £2,431.99 on amazon.co.uk for the Peatmore Press book, Cogrill’s Mill, have now disappeared from its book pages since I posted my blog on 23 July.  I am glad to see that someone has been paying attention to my posts.

The Mystery of the Peatmore Press Amazon Paperback Novels

Listings for the paperback versions of Peatmore Press novels have disappeared from amazon.com and amazon.co.uk with one exception; the exception being my first novel, “Cogrill’s Mill,” on amazon.com.  This novel is still listed as being available from my Company, “Peatmore Press,” as an independent trader at $10.00 plus postage and packing which is about right.  The listings of the company’s other novels have been removed from amazon.com and there are no listings for any paperback book from Peatmore Press as an independent trader on amazon.co.uk.

Peatmore Press’s status as an independent trader was removed from amazon.co.uk about a year or so ago, presumably because we did not sell enough books through the Amazon web page.  That is understandable because as a retailer Amazon has a perfect right not to sell any books it does not deem profitable.  But there is another exception which is quite staggering as one independent seller is advertising Cogrill’s Mill at a staggering $615.72 on amazon.com and an another for an outrageous £2,431.99 on amazon.co.uk. (See www.amazon.com/dp/B005NACKBY and www.amazon.co.uk/dp/B005NACKBY).  I call this staggering and outrageous as Cogrill’s Mill is available through the Peatmore Press website (www.peatmore.com) and can be ordered through any bookseller for £6.99 (for peatmore.com there is an additional charge of £2.01 for postage and packing).

This occurrence is not by any means unique.  Check out the article by Shaunacy Ferro (see https://tinyurl.com/yd7m7q8x) with regard to “One Snowy Knight” a historical romance novel by Deborah MacGillivray, which at one point a paperback version was advertised on amazon.com for $2800.  This advert has since been removed, but the article makes interesting reading.  It will also be interesting how long these highly expensive adverts on Amazon stay listed following the publication of this blog.

My kindle ebook versions of the Peamore Press novels continue to be listed on Amazon as they continue to sell or have been available under various promotion deals approved by us.  My own theory is that the listings for paperbacks have been removed as Amazon would prefer it if we republished these paperbacks using their own publishing service known as Create Space.  This is just a theory so I may be wrong about this.

But if anyone who reads this can tell me how this phenomenon has been allowed to happen.  I would be interested to hear from you.

This is a must read for anyone who wishes to understand the processes that go on inside political campaigning in British politics.  It is told by an insider who helped organise Jeremy Corbyn’s campaign during the 2017 British General election.  It is therefore unashamedly biased towards the philosophies of the Labour Party so if you are a supporter of any other British political party, particularly the Conservative Party, many of the views expressed here will be extremely hard to take.  But even so anyone who actively supports such parties will find a great deal to learn from the events described by the Author.

When Prime Minister, Theresa May called a snap election in April that year no one in the mainstream media gave Corbyn a chance.  His party appeared in turmoil as a large proportion of Labour MPs had tried twice to unseat him as leader and the Labour Party was so far behind the Conservatives in the polls.  Consequently, May saw it as an opportunity to strengthen her position as Prime Minister and leader of her Party ahead of her negotiations to take Britain out of the European Union.  However, such was the success of the Corbyn campaign that, despite being unable to topple May’s premiership, their individual political standings within their own parties were reversed.

It was a remarkable turnaround in the positions of the two party leaders and it is a story that is extremely well told.  It is a narrative that the Conservatives will seek to put far behind them but for anyone interested in British politics it is an account that should be read.  The book is skilfully written and contains lots of facts and footnotes relating to broadcast and newspaper reporting at the time.  This is not surprising given the author’s background in journalism and in time it should serve as a useful reference for anyone wishing to look back and study what must surely be a significant event in Britain’s political history.

Published by Accent Press in
hardcover, paperback and as an ebook

Summer is here and there is no better time to spend the day outside reading on lazy sunny days.  It will soon be the holiday season in the northern hemisphere so choose some books to take with you to while away idle relaxing moments.

It is a good time for authors and publishers to release books so that bookstores at airports, train stations and holiday resorts can stock up to help travellers make those last minute purchases.  Peatmore Press is no exception and has launched its fourth novel which is the first I have released under my own name.  It is a crime thriller and I am told by those who have had a chance to turn the pages that it is a good read.  But see for yourself and let me know how you feel about it. 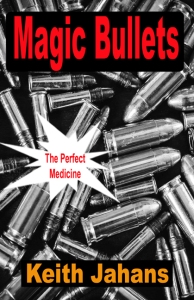 Published on 2 July 2018
and can be bought by following the links at
http://peatmore.com/magicbullets.htm