Graham Taylor: In His Own Words – a talk by Lionel Birnie for Watford Writers Group on 19 March 2018

Last night I attended an inspiring talk by sports journalist Lionel Birnie about how he went about ghost writing football manager Graham Taylor’s autobiography.  I have been staying in Watford for the past few months now and this was only the second time I had visited this writers group.  A number of the members knew Taylor personally so this was a very poignant and emotional occasion.  Taylor sadly died at the age of 72 on 12 January this year shortly before the book was published.  The book was written in the two years before his death and it was his family’s wish that Lionel and his editors proceed with the book project as they knew that it would have been what Taylor wanted.

Lionel gave an excellent account of his writing process which served as a splendid example to the writers present.  He told how he gave Taylor a notebook with several headings pertinent to his life and asked him to write down the thoughts that came into his head.  He recorded their many conversations on a small portable tape machine and went with Taylor to visit locations that were pertinent to his life.  He emphasised the efforts he made to make the book sound that it was written in Taylor’s own voice as he felt this was so important to Taylor’s family and Taylor himself.

Graham Taylor is an important figure to Watford, not just to the football club which he managed for two distinct periods, but the whole town.  This was indeed easy to see from the warmth of Lionel’s talk and by the way it was received by his audience.  I was so impressed by what I heard that I bought a signed copy, have added it to my increasingly lengthening reading list and plan to review it later this year. 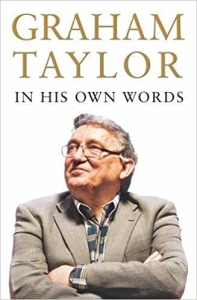 Graham Taylor In His Own Words: The autobiography
is published by Peloton Publishing Ltd and is available in hardback for £19.99

This entry was posted on Tuesday, March 20th, 2018 at 1:46 pm and is filed under Writing. You can follow any responses to this entry through the RSS 2.0 feed. You can leave a response, or trackback from your own site.

3 Responses to Graham Taylor: In His Own Words – a talk by Lionel Birnie for Watford Writers Group on 19 March 2018