I do not normally read biographies but having met Tim Hannigan at The Penzance Literary Festival in July where he was running a workshop on travel writing I thought I would give this book a try. I was not disappointed. The author puts the reader squarely in the thick of the action. We can smell the jungle, the smoke and cordite of the muskets and hear the sound of canon fire, the cries of the combatants and the rattling of the sabers.

This is an account of a short lived campaign of the British army at the height of its empire and according to Hannigan, Raffles comes out of it with an extremely tarnished reputation. Raffles is famous as the founder of Singapore and London zoo. But it seems he was an opportunist out to make a quick buck. He was involved with corruption, turned a blind eye to slavery and complicit in inciting the massacre of Dutch citizens. This is all the more shocking because of the high esteem in which his memory is held by many.

This book is an extremely good read and I highly recommend it. 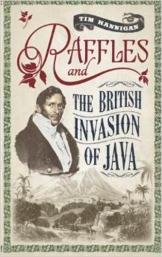 This entry was posted on Monday, March 16th, 2015 at 11:16 am and is filed under Book Reviews. You can follow any responses to this entry through the RSS 2.0 feed. You can leave a response, or trackback from your own site.