This was the last day of the Festival. At 11 am I took part in a travel writing workshop led by award-winning Cornish travel writer, Tim Hannigan. It was expertly run and I received some excellent tips on how to sell articles to travel magazines.

The workshop was held in a rather grand room in the Union Hotel. It was from the balcony in this room that Nelson’s victory and death at the battle of Trafalgar was first announced. A rather ghoulish face which we were told was Nelson’s death mask is suspended below the balcony. Thus we discussed our views on how to make the best use of our travel adventures as an exceedingly unhappy Nelson looked down on us from above. 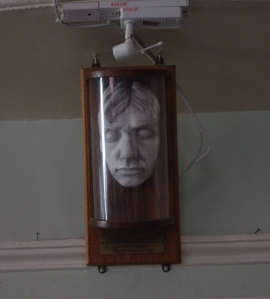 I returned to the Acorn Theatre that evening to witness a script in hand reading by ‘The Wireless Ensemble’ of Penzance writer Stephen Saunter’s comedy radio play, “It’s What he would have wanted,” about along overdue burial. Given that I have recently witnessed two very sad funerals I should not have found it funny. But I did.

After the performance finished I was honoured to be allowed to take part in Shout Kernow: the tradition of Cornish pub singing in the theatre bar. It was hosted by two ladies, Hilary Coleman and Sally Burley, who had succeeded in obtaining funding to travel to all the pubs in Cornwall to write down traditional songs they might hear there on condition that they would write a book of there experiences (some in the audience thought it an enterprising way of financing a pub crawl). The book has yet to appear but I added my email address to the long list of people who wished to be notified when it finally materialized. However, they did produce some song sheets and we set about them with great gusto with the aid of the Red River Singers. It was a perfect end to a great festival. Long may it continue.

Although I had been in Penzance for three days I had not ventured far from the literary venues except to visit the odd pub for lunch so I decided that I must see more of the town. I wended my way down to the sea front and strolled along the promenade. I saw the Jubilee Pool and St Michael’s Mount. The Jubilee Pool (or Lido) had been damaged by the winter storms and closed for repair. If the required money is not forth coming then it is in danger of closing. I stopped to buy lunch at the Pirates Fish and Chip Shop and ate it while sat on a bench on the promenade overlooking the sea. Then I strolled round the harbour before returning to the town centre where the festival venues are held. Penzance is not among the most picturesque of Cornish towns but I enjoyed what I saw. There are many intriguing shops and pubs to explore. One shop was inhabited by a Darlek. I knew it must live there as a sign said that it was not for sale. 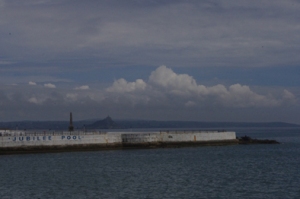 Jubilee Pool with St Michael’s Mount in the distance

That afternoon I took part in an “open mic” poetry session at the Penlee Coach House run by the delightful Dina Dixon. A wide range of poems were read by both young and old. Adrian Rodda gave a rendition of a Cornish folk tale, ‘The Changeling of Chapel Carn Brea’. There were some excellent recitals from the works of Dylan Thomas. Two of the younger participants, Roxy from New York and Sebastian who was local, performed some thought provoking social commentary renditions. I read my Dulux colour poem and the Joe Thropp eulogy from “Cogrill’s Mill”. Both seemed to go down well but one lady in the audience thought that the Thropp poem might be directed at one of her forbears as Throp was her family name. I assured her that it was not as my Thropp was a totally fictitious character and his name had a different spelling anyway. But it was a close shave.

I visited The Morrab Library once more for a talk on Cornish Naval History given by J D Davies whose book I won the night before. Cornish seamen have been stereotyped as pirates and wreckers but there have been many courageous naval commanders (eg Richard Grenville and Admiral Hawke) serving the UK throughout history. Most sailors in the eighteenth and nineteenth century Royal Navy were volunteers. Less than 16% were press ganged.

That evening I returned to The Acorn to witness a brilliant performance by the Bookshop Band. They were formed in Mr B’s Emporium of Reading Delights in Bath to set stories and plays to songs and music. They are well worth a listen.

I went back into Penzance in the evening to take part in a literary quiz at The Acorn. I joined a team of four called “The Last Train” as they had to catch the 9.45 to Birmingham that evening. At half time we tied in equal first first place and won a signed book, “Gentleman Captain”, by J D Davies. But by then my four companions had to leave for the train. I then joined another team of four who were coming last as they had only got six correct questions. They were amazing people. One of the two couples (Chris and Melinda James) were originally from Texas but had been living in Penzance for five years. They claimed to be truly Cornish and had persuaded a professional artist, Jason Walker, to paint their portraits as “The Old Cornish Couple”, complete with Cornwall’s flag in the background. They claimed that the picture was hung in the Portrait Gallery in The Mall, London. That night there was a violent thunderstorm but the 1 Minute Tent survived.

On July 16 I scanned the http://www.literaryfestivals.co.uk website on the internet and I discovered that there was a literary festival starting that same day in Penzance, Cornwall. It seemed too good to miss so I packed my newly purchased 1 minute tent from Halfords and headed South-West. I arrived at 5 pm and found a campsite 25 minutes walking distance from the centre of the town. I was too tired to attend any events that evening but next morning set off for a tour of The Morrab Library, one of just 19 independent libraries in the country. 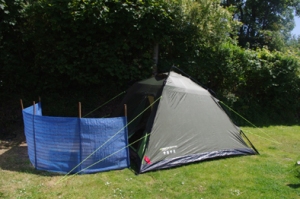 My One Minute Tent on Campsite near Penzance

The One Minute Tent is so called because it is claimed that it can be pitched in one minute and taken down and packed away again in another minute. With me it takes about ten but I am sure I can improve with practice.

At the Morrab Library I was given a fascinating talk by a delightful lady called Dawn. The library collection started in 1818, during the time of the Napoleonic Wars, and contains a fantastic number of books and photographs that are unique to the library. The collection was begun by the ladies of Penzance. No men were involved in the early days. Dawn told our group about some of the titles that fascinated her such as “The Duties of a Housewife” and “A Thousand Ways To Annoy The French”. The talk was followed by a short tour of the library. Dawn or one of her colleagues gives the talk and tour every Friday. It was a rewarding experience and afterwards I donated a signed copy of the Peatmore Press novel, “Cogrill’s Mill”, to show my appreciation.