I spent the night of 30th March at a campsite in Kingsbury Water Park at Sutton Coldfield. It is a holiday centre catering mainly for families with young children although there were activities available for older folk such as sailing and boating on the lake.

The following day I was still restless so I packed up and continued my way north on the M42. I had not got far when I spotted signs for the Bosworth Battlefield Heritage Centre. This was the place where Richard III, the last British King to die in battle, met his end. His body was recently found when a car park was dug up in Leicester. Fascinated by this story, I deviated from my course and followed the signs.

It took me a long while to follow the signs but when I arrived at the visitors centre I was not disappointed. There was an interactive exhibition with plenty of information on view and also a chance to walk the battlefield. I declined the walk but was most impressed by the exhibition.

View of Battlefield from Memorial Sundial

There was still a dispute going on about what to do with Richard’s remains. Both the cities of York and Leicester have staked claims to keep them. The receptionist at the centre told me that while the legal battle raged on they were in a cardboard box in Leicester Museum.

I continued my journey northward. The M1 was slowed down by miles and miles of road works so that traffic speed was reduced to fifty miles an hour. After a while I tired of this so once again I diverted from my course to the Yorkshire seaside town of Scarborough as I was sure I could find a campsite there where I could settle in for the night.

On Friday 28th I felt a strong need to hit the road on my travels again. It turns out that in the village of Chobham, which is next door to my home village of Knaphill in Surrey, England, there is a small company which rents our Volkswagen campervans. I called in on spec and to my delight found that they had one available for hire that very day. I quickly agreed terms and drove the said vehicle called Daisy (their name for her not mine) to my home in preparation for my departure the following day.

Daisy parked up at my home ready for loading

So the next day I packed up and headed North on the M40. My initial destination was to visit my son who was studying at Wolverhampton University. He too was seduced by Daisy’s charms and agreed to join me on the first stage of my journey. We picked a name from the Camping Club book and arrived at Delamere Forest Park, South of Manchester. There we wrestled with the complexities of our new temporary home.

Daisy’s roof could be raised to allow more living and sleeping space. However, neither of us relished being tucked up at night in the small roof space so we shared the large double bed at the back. Alex had to return to his studies next day, as he is in his final year at University and they are at a crucial stage, which was just as well as being large adult males we both spent an uncomfortable night. 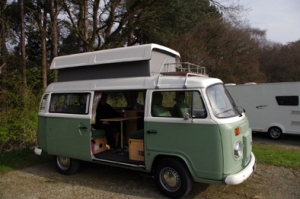 The following morning we went for s short walk in the park and then visited the tiny Delamere Railway Station which is right next to the campsite.

Then I returned Alex to his studies at Wolverhampton, picked another name from the Camping Club Book and headed to Kingsbury Water Park in Sutton Coldfield alone.