The Nordlys reached harbour at midnight and we slept well last night at a Tromso hotel knowing that our mission to see the Northern Lights had been accomplished.  Some members of our company claimed that the lights on occasion reached the brilliant green for which they are noted.  I am afraid I must confess that I failed to see this.  However, I did not stay on the freezing deck as long as most.  While I was out there I tried in vain to capture the lights on film but I failed to come to terms with finding the correct settings for my digital SLR.  Had I had my old 35 mm film camera with me I would have probably succeeded but at least I can say honestly that I saw the renowned Northern Lights and found them impressive.

I spent some of the morning walking the snowy streets of Tromso and photographing various notable sights.  If you have been following this blog you will have noticed how dark my pictures appear to be.  This is because at this time of year in Norway there is only about four hours of daylight and even these give the appearance of dusk.  In summer the reverse is true and the sun shines almost for twenty-four hours.  Not for nothing is it called “The Land of The Midnight Sun.” 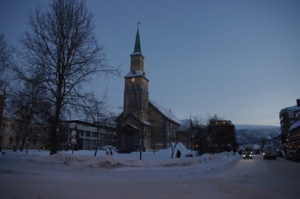 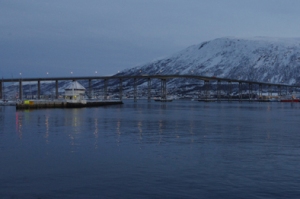 A coach arrived at one o’clock and drove us to the airport.  It had been a very satisfactory trip apart from accidently leaving my ipad behind in the pocket of the aircraft seat in front of mine.

There were no further sightings of the Northern Lights the previous night.  In the morning we set sail for Hammerfest.  This is supposed to be the most northern town in the world and we arrived here at about eleven o’clock in the morning.

The town has largely been rebuilt in recent years as like Alta it was virtually destroyed by the Nazis in World War Two and the population forcibly evacuated.  It became a large fisheries centre and Findus had a factory here.  But then Findus left and the town went into decline.  However, with the discovery of oil and gas it is now booming with properties reaching exorbitant prices.

We disembarked and once again took in a coach sight seeing tour around the town and up into a mountain overlooking the harbour. 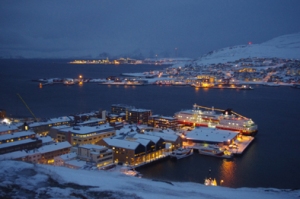 The Nordlys in Hammerfest Harbour 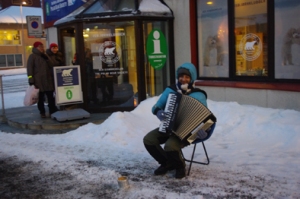 We left Hammerfest at 12.45 and headed back towards Tromso where we were told the sky should be clearer and there was a greater chance we would get another glimpse of the Northern Lights.  Then low and behold we saw them as a faint creamy swirling glow in the night sky.

The weather we experienced the day before had been bad for the time of year even by Norway standards.  Roads had been blocked by snow falls and the airport at Tromso had been closed.  But now the snow and wind had abated and we were able to go ashore. 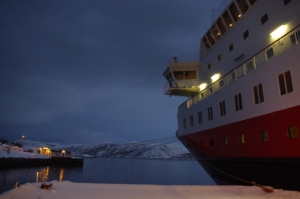 The Nordyls tied up in Alta harbour.

A tour bus took us on a sight seeing tour of Alta.  It is a small town and there was not much to see as much of it had been burned by the Nazis in the Second World War.  We journeyed on to Alta Museum where we saw a fascinating display of ancient rock carvings.  The carvings date from 2500 and 6000 years ago and show clear representations of boats animals and people. 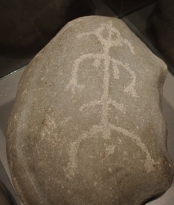 We left the Museum at twelve noon just as the sun was beginning to set and returned to the harbour as dusk was settling in to find the Nordlys lit up against the dark afternoon sky.

Sunset at 12 noon in front of Alta Museum 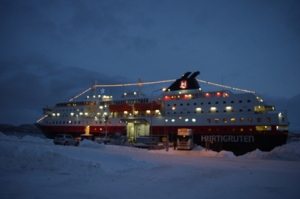 The Nordlys lit up for the evening at Alta harbour

That evening I dined on fish soup and reindeer steak (again I hope that Santa did not get to hear of it) followed by an ice pavlova with cranberries.  Just as the meal was starting the Captain announced that the Northern Lights could be seen from the starboard bow.  We downed our knives and forks (some of us donned coats) and hurried outside.  I saw a faint green bow in the sky just below a star.  I returned to finish my dinner then returned to get my coat, binoculars and camera but by then the green glow in the sky had largely disappeared.  I am now in my cabin with binoculars, coat and camera at the ready waiting for another announcement.

This was a bad weather day.  The ship pulled into Honningsvag which is the harbour nearest the North Cape.  The North cape is Europe’s most northern point and we were due to set foot here for some site seeing.  But the Captain told us that the wind was picking up so only those disembarking were allowed off the boat.  However, I was able to take some photographs of the town from the deck. 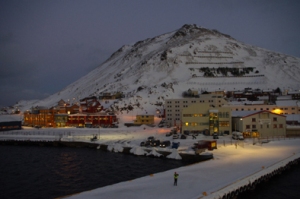 We turned southward towards Alta and because of the wind experienced some very choppy water and were advised not to walk around the ship.  In the evening we were treated to an excellent open buffet consisting of Crab meat, crayfish, lobster, squid and cod and I ate some stewed reindeer for the first time in my life.  I found it very tasty indeed and hoped that Santa was not watching.

It is planned that we stay in Alta over night and tour the town the following morning.  By then the bad weather should have past and we can head north again towards Hammerfest.

My companion and I arrived in Tromso by plane from Gatwick Airport at 3.20 pm local time (2.20 London time) to find that snow had fallen and so had night.  A short bus ride took us to the harbour where our cruise ship, the Nordlys (Norwegian for Northern Lights) awaited us. 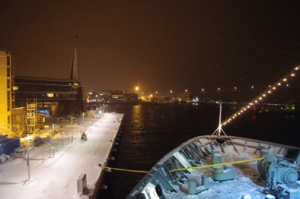 Views of Tromso from Deck of Nordys at about 4.30 pm local time 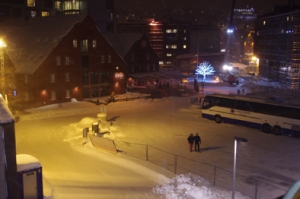 I dined at 6.30 on cauliflower soup, some sort of smoked fish followed by a sweet which seemed to consist of cold rice pudding, jam and blue berries.  Later at 9.30 I accompanied some stoic passengers out to the “sun” deck where we watched the captain demonstrate how to prepare “Stock Fish”, which is dried cod tenderised with a hammer and is a Norwegian delicacy.  Unfortunately I was offered a piece which was not tenderised enough and broke a back molar. 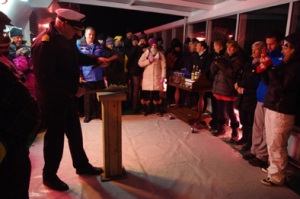 The Captain of the Nordlys Preparing Stock Fish.

I am now sailing north along the Norwegian coast deep into the Arctic Circle wondering what further fortunes lie in wait.