Caught the 12.10 pm flight from Gatwick and arrived in Madrid around 4 pm local time.  Then took a bus to the city centre and arrived at our hotel at about 5.30 so, apart from a brief walk to a restaurant nearby had little time for site seeing.

Took a city bus tour the next day starting very near Madrid’s most famous square, the Plaza Mayor.

The tour took us passed Real Madrid’s famous football stadium where Manchester United drew in the Champion’s league on 13th February.  They are due to play again in the second leg of this fixture in Manchester tomorrow.  Last year I was in Lisbon when Chelsea beat Benfica in the same competition and then went on to win the champioship.  Perhaps some of the luck I experienced then will rub off on the Manchester team.

We passed many striking statues on this tour and I was particularly impressed by the Puerta de Alcala, an imposing city gateway designed by Francesco Sabatini. 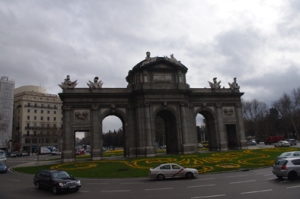 Then in the evening we walked down the hill towards the Neptune Fountain and as the clock struck 8 o’clock saw the dancing statues parade on the balcony of the Plusultra Seguras.

The dancing statues of the Plusultra Seguras

This entry was posted on Monday, March 4th, 2013 at 11:51 pm and is filed under Travel. You can follow any responses to this entry through the RSS 2.0 feed. You can leave a response, or trackback from your own site.